CLEVELAND — The Cleveland Browns rode a dominating defense and a pair of Nick Chubb touchdown runs to a 32-13 victory over the Cincinnati Bengals — who were without injured wide receiver Ja’Marr Chase — on “Monday Night Football” in Cleveland.

Cleveland buried Cincinnati quarterback Joe Burrow on the way to a dominating victory, giving its moribund season a jolt headed into a bye week.

The Bengals entered “Monday Night Football” having scored in 41 consecutive halves. But a suddenly resurgent Browns defense snapped that streak, holding Cincinnati scoreless in the first half. The Bengals’ defense also had not allowed a touchdown in a second half all season. But Cleveland scored touchdowns on its first two drives out of halftime to put the game out of reach. 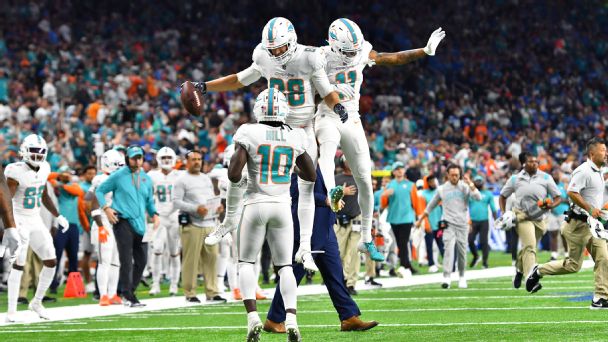 • Dolphins thriving in late-game adversity
• At 6-1, are the Vikings for real?
• Reaching .500 a huge boost for 49ers
• Patriots united behind QB Mac Jones
• A.J. Brown still sees room to grow

The Browns (3-5) still have work to do to claw their way back into the AFC playoff picture. But this victory means their season is far from dead.

Buy on a breakout performance: The Browns came into the week ranked 30th in defensive efficiency. But after a promising performance last weekend in the loss at Baltimore, Cleveland’s defense finally performed up to its preseason expectations. Talent has never been the issue. The Browns might have uncovered the chemistry and cohesiveness that had been missing.

Eye-popping Next Gen stat: Browns QB Jacoby Brissett was given an average of 3.24 seconds to throw per pass. As a result, he completed 17 of 22 passes for 278 yards, including 259 passing yards when given at least 2.5 seconds to throw.

Bold prediction for next week: After a week of trade rumors surrounding running back Kareem Hunt, the Browns won’t deal him before Tuesday’s trade deadline. A loss Monday might have prompted Cleveland to trade Hunt, who is in the last year of his deal, for a late-round pick. The way Cleveland’s offense clicked with Hunt manning a significant role in the win over the Bengals should be enough to convince the Browns to ride out the rest of the season with him. — Jake Trotter

Underrated statistic to know: With Myles Garrett‘s first-half sack, he became the first Browns player with at least 65 sacks since the statistic became official in 1982.

With the Bengals in a tight battle with the Baltimore Ravens in the race for the AFC North, losing to the Browns was going to hurt Cincinnati’s chances of repeating as division champs. Cincinnati (4-4) didn’t just lose, it was pummeled in a loss that didn’t feel nearly as close as the final score suggested.

Last season, the Bengals were 4-2 in AFC North play, sweeping Baltimore and Pittsburgh. A fifth straight loss to Cleveland in the series between the teams reduces Cincinnati’s margin for error the rest of the season.

Week 9 will test fantasy managers’ depth as six more teams head into their bye week: 49ers, Broncos, Browns, Cowboys, Giants and Steelers. Check out our waiver wire columns to see whom you should add to your team this week.

Streaming Pickups
Matt Bowen identifies the players who can help you in deep leagues or in case of bye week.

Describe the game in two words: Brutal showing. Cincinnati’s night started poorly, unraveled throughout the game and the Bengals were never even competitive against a struggling Cleveland squad.

QB breakdown: Without Chase, Cincinnati’s offense resembled the unit that struggled early in the season. Unlike in last week’s game against the Atlanta Falcons, Bengals quarterback Joe Burrow was limited in downfield production. Fifteen of Burrow’s first 21 attempts were for 10 air yards or less, according to NFL Next Gen Stats. When the game was in balance, Burrow took a few downfield shots. But whether it was due to Chase’s absence or another reason, Burrow and the offense just didn’t have it.

Pivotal play: Once again, Garrett caused problems for Cincinnati. On the Bengals’ first drive of the game, things were promising until Garrett sagged off the line of scrimmage and batted a Burrow pass into the air. Browns cornerback A.J. Green III intercepted the deflection. From there, the Bengals were playing off the back foot and ultimately never recovered.

Hole in the game plan: For all the chatter about Cleveland’s rushing attack, it was backup quarterback Brissett who torched Cincinnati’s defense through the air. At one point, the Browns averaged 9.2 yards per pass attempt. Cincinnati’s efforts took a big blow when cornerback Chidobe Awuzie left the game at the end of the first half with a right knee injury. Rookie Cam Taylor-Britt, the team’s second-round pick this year, made his first NFL start opposite Awuzie. — Ben Baby

Underrated statistic to know: Burrow has thrown an interception on the opening drive in each of his past three starts against the Browns.