For the record, no actual hate towards Amari Cooper. He was just a thorn in the Pittsburgh Steelers’ side last night and I can’t pass up the chance to make an obscure reference to one of the very few movies I’m aware of.

While the Cleveland Browns’ strong running game will rightfully garner up most of the attention today, Nick Chubb had his way with the Pittsburgh Steelers’ front seven last night, Amari Cooper was the man who made the first-half impact. He picked up where he left off in their Week Two loss to the New York Jets, finishing last night’s victory with seven catches for 101 yards and a touchdown.

We’ll start with Cooper’s touchdown, the first of the night for either side. A red zone score, Cooper was open on a slant for an easy pitch-and-catch. Here’s how things looked pre-snap.

Cleveland is in 11 personnel, three receivers on the field. Pittsburgh doesn’t match personnel here, staying in their base 3-4 defense in an effort to stop the run. With only two cornerbacks on the field, Terrell Edmunds is tasked to align against Cooper over the slot.

Edmunds is playing off coverage and with safety help to the top, is protecting himself against an out-breaking route. The Steelers are in Cover 1, man-free here, man coverage across the board with Minkah Fitzpatrick playing the deep middle zone. Edmunds is getting too much depth on the snap, far too much of a cushion, and he isn’t able to drive on the football to make a play on the throw, instead running parallel and trying to tackle the catch. He nor Fitzpatrick can close quickly enough and Jacoby Brissett hits him on the money for the score.

It’s also worth noting the Steelers are sending a five-man rush here, not dropping out an OLB like they often do, especially against 11 personnel here. Pittsburgh’s trying to send numbers to generate a pass rush but it doesn’t get home and the off-coverage to Cooper, their top target, makes for a quick throw by Brissett.

Throughout the game, Cooper certainly put Ahkello Witherspoon in a blender. Early in the second quarter, Cooper turns Witherspoon around with this great route for an 18-yard gain. Watch Cooper release off the line and threaten vertical, getting up to full speed to get on the corners toes and make him think the route is going deep. That forces Witherspoon to open his hips and as Witherspoon does, Cooper breaks his route off to the sideline. This creates a ton of separation as Witherspoon has to flip his hips around to match him and Brissett makes a good sideline throw with Cooper tapping both feet inbounds. Really strong route here.

Third-quarter on the Browns go-ahead field goal drive. As they’ve done year after year, Cleveland dominated Pittsburgh with their empty set, the Steelers unable to find answers with man or zone. After getting picked apart in zone, they try man coverage here with Cooper becoming the #2 as RB Nick Chubb is motioned out. LB Robert Spillane is walking out with him is a strong man-coverage indicator, though it’s worth pointing out the Steelers played zone out of that look in Week One against the Bengals, a play that led to Witherspoon’s pick in Week One. 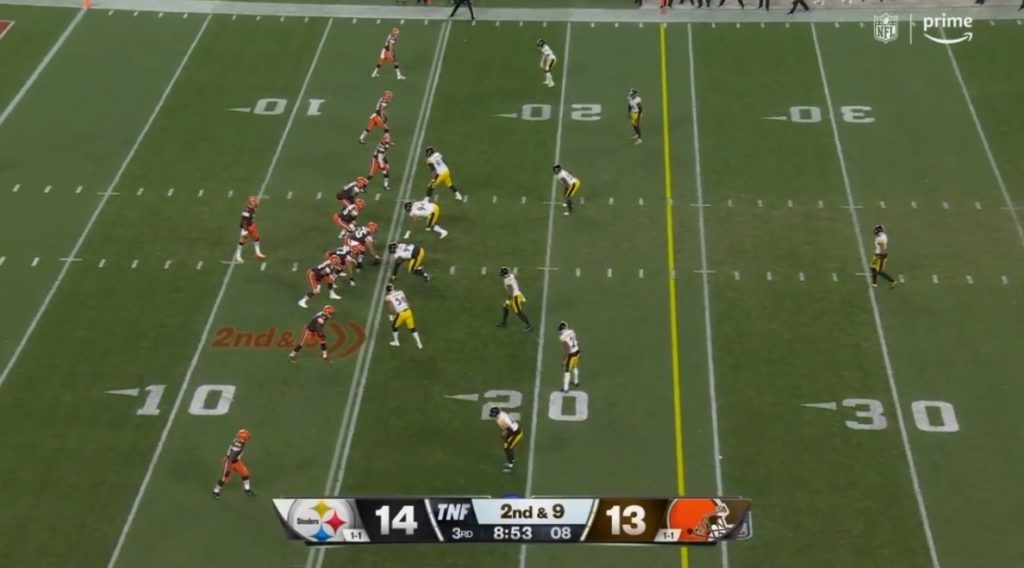 Here, the Steelers are in man coverage and Witherspoon is uncomfortable working out of this slot alignment. Cooper is essentially running a speed out at a bit deeper depth of nine yards, right at the sticks. Cooper creates space on his cut and Witherspoon flails as he comes out of his break. Another accurate ball by Brissett, some really solid throws by him last night, and Cooper’s hit in stride and turns upfield. He tightropes the sideline for another 19 yards for a 28-yard gain. Broadcast and All-22 angles here.

Again, Pittsburgh is playing Cover 1/man-free here out of a 3-4 look with three ILBs and just one EDGE rusher on the field. They bring a fifth rusher, Myles Jack rushing from depth and unable to get home in time. Another five-man pressure that limits coverage, can’t play Cover 2 out of a five-man rush, and leaves fewer guys to cover. if the rush doesn’t get home, you’re not in a great spot. The YAC here is especially painful.

Final one. A backbreaker. 3rd and 1 on the first play of the fourth quarter. Steelers expecting a QB sneak or run after getting chewed up throughout the quarter. But it’s playaction, a two-man route with a post/wheel route. The Steelers bite hard and Cooper cuts across the field, creating space against Cam Sutton and Brissett puts it on him for a 32-yard gain.

Minkah Fitzpatrick bites hard on the stretch playfake and is totally taken out of the play. Sutton has outside leverage and Cooper uses a great stair step to initially push vertical and then snap the route off on the crosser to create explosion and space. Sutton ends up trailing and can only tackle the catch to prevent a long touchdown.

Cooper added a couple of nice plays along the way but those were the biggest ones and none of this even considers his would-be long catch-and-run negated by him stepping out of bounds. As we wrote in our pre-game scouting report, Cooper was an overlooked and too easily forgotten piece in a busy receiver market this offseason. He’s been a dominant force over the last two weeks and is paying off as the team’s true #1 receiver, pairing so well with their potent run game.

How the Tampa Bay Buccaneers Can Make the Playoffs: Through Week 2

Is Najee Harris On The Same Career Trajectory Of Another Former Crimson Tide Running Back?